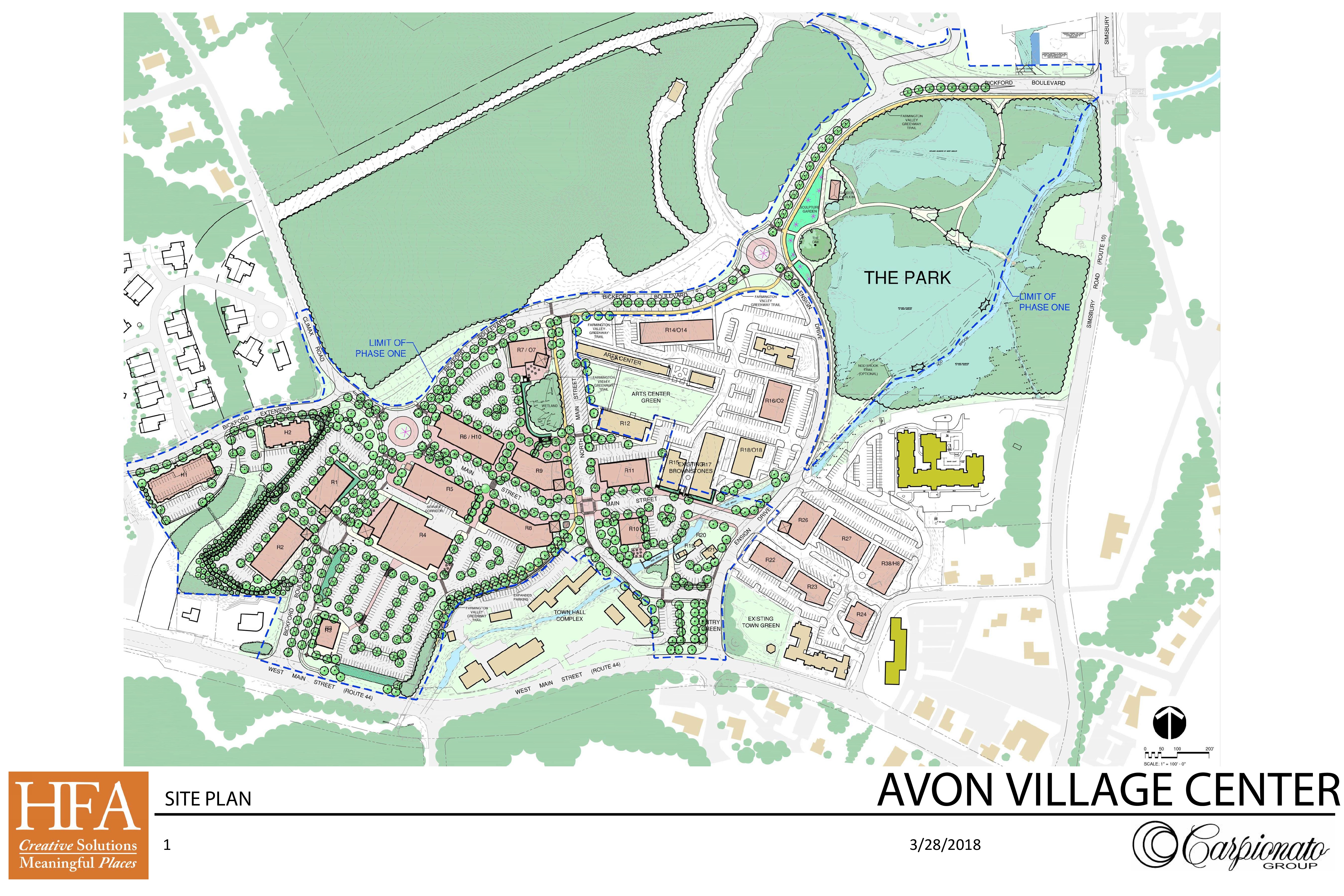 A Rhode Island developer says construction could begin as early as Oct. 1 in Avon's center on the initial phase of a long-awaited residential, office and retail complex that when fully complete will represent an investment "north of $200 million."

Carpionato Group, of Johnston, R.I., received unanimous approval July 31 from Avon's planning and zoning commission to commence with constructing the first of 11 buildings totaling about 300,000 square feet on 61 acres of Avon Village Center's 96 acres near the intersection of Albany Turnpike/Route 44 and Hopmeadow Road/Route 10.

Included in that first phase, Pierik said, is a 90-unit apartment community that will feature a range of unit sizes and rents. Also, office space will be above some portions of the ground-floor retail and restaurant spaces.

"We're optimistic to be in the ground on or about Oct. 1,'' he said of site excavations and infrastructure improvements that precede building construction.

Avon Village Center is an extension of some two decades of planning by Ensign-Bickford Corp., a historic Avon employer that sold the acreage to Carpionato in 2011, Pierik said. Ensign-Bickford is not a project partner.

Since then, the developer, whose extensive New England realty holdings include Connecticut properties, has been working with town planning officials to refine and implement its Avon Village Center vision, Pierik said.

"This project has been contemplated for over 20 years," he said. "... This is in the heart of Avon. It surrounds Avon Town Hall. It's prominently positioned off Route 44 and at the corner of Route 10.''

Hiram Peck, Avon's director of planning and community development, said Carpionato has worked closely with the town "to get the design and building characteristics to fit the unique Village Center character … ."

"The economic development implications for Avon and this region are huge," Peck said via email. "This … will allow residents and shoppers from this area to find things that they previously had to drive some distance to get. In addition, the restaurants and recreational and performance venues will also be a big boost to this area."

Carpionato has experience with a similarly ambitious development, The Chapel View, an approximately 1 million-square-foot mixed-use development in Cranston, R.I., whose tenants draw about 3,200 workers there daily, Pierik said.

Pointing to West Hartford's Blue Back Square, a successful urban mixed-use development in the heart of that town, Pierik said Carpionato and Avon envision Avon Village Center capitalizing on the surrounding bucolic vistas and greenspaces.

Recently, Carpionato relocated a portion of the town's East Coast Greenway closer to the town's offices and its village center, adjacent to the initial phase of Avon Village Center. Also planned is a specially designed, sustainable "waterfall park,'' Peck said.